Hiroyuki Itoh (b. Sakata, Japan, 1963) received his Ph.D. in music from the University of California, San Diego in 1994. He studied composition with Joji Yuasa, Shin-ichiro Ikebe, Roger Reynolds, and Brian Ferneyhough. His awards include the first prize at the Nuove Sincronie International Composition Competition (1995), a Stipendienpreis at the Darmstadt Ferienkurse (1996), and the Akutagawa Composition Award for Orchestral Music, one of the most prestigious composition awards in Japan (1998). His works have been performed in Europe, North America, and Asia by ensembles and orchestras such as the Arditti String Quartet, Quatuor Diotima, Klangforum Wien, Nieuw Ensemble, Tokyo Sinfonietta, Ensemble Nomad, Ensemble Contemporary Alfa, Next Mushroom Promotion, Vox Humana, Izumi Sinfonietta Osaka, and the New Japan Philharmonic as well as many extraordinary soloists.

Itoh’s first portrait CD, Swaying time, Trembling time, was released in 2006 from MusicScape, and his second one, Swaying into Darkness, in 2010 from Fontec. Itoh was the director of the "New Horizons Concert Series" at the Takefu International Music Festival between 2006 and 2011. He is a professor of composition at the Music Department of the Nihon University and currently lives in Tokyo, Japan.

by Hiroyuki Itoh. For alto saxophone and piano, a new work with complex rhythms which are meticulous..

The Angel of Despair II

by Hiroyuki Itoh. For solo alto saxophone.Click to watch on Youtube!.. 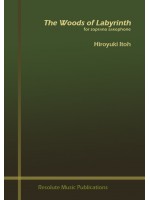 Woods of Labyrinth, The